This blackbird looks a bit like I’ve been feeling… totally flaked out, gasping for breath – mentally at least – being in the midst of an awful lot too much to do!

Yesterday Graham and I skipped church. The youngster was off at 8.15am in the tender care of the Scouts and the British Canoe Union somewhere near Gosport doing his Paddlepower qualification, so having dropped him with them at the Scout Hut, instead of going home for church, we just kept walking. 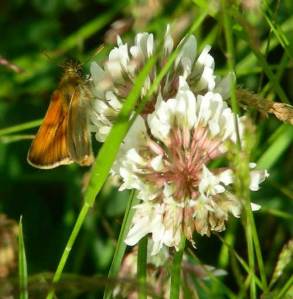 We were only out for just over an hour, but it was a good walk with the dog before the heat of the day. It was a chance to just ‘be’ together, talk about totally random stuff, and yes, worship God among the wonders of his creation. Wandering round our favourite field there were clouds of butterflies: the Ringlet’s (see previous post) are probably at their peak of numbers, and there are plenty of Meadow Brown’s, and then there were these little folk: much smaller and they hold their wings at angle when settled; when we got home we discovered they were Little Skippers.

Graham also got a fantastic shot of a Black Tailed Skimmer dragonfly eating a green bottle which he’s put up on his Flickr site; Ramograph

We spent the rest of the morning just chilling out and ‘being’ before starting the new week in the afternoon  (he packed for his field trip to the IOW which started this morning, I went and found out a bit more about the ‘Growing Leaders’ course I will probably do next year, part of the leadership development in our EDGY group of parishes…Eversley, Derby Green and Yateley.)

Saturday had been a Reader Training study day at Old Alresford Place, where I’d delivered the last assessed presentation/sermon before Licensing. I’d spent the latter part of the week working really hard on it (after several attempts on bits of it) among many other family commitments and after delivering the Mid-Week Service (with sermon) on Wednesday.

We’re doing a module called Faith and Daily Life which looks at the how the world of ‘work’ (whatever we fill our day with) links with our faith, and we’d had to draw one particular idea out that had come from something we’d experienced, or the experiences of a member of our ‘Monday Matters’ group. The latter is an series of homegroups we have to lead as part of the module (assessed by theological reflection and participant feedback). I took as my theme ‘Redefining Ability’ and looked at some ideas about how daily life and church/worship can be related to aspects of our Trinitarian God (as the module requested). I’m not sure how it went, and don’t think my title really worked in relation to what I delivered, but hey ho, something to put in the reflection I need to complete this week to hand in.

However I did get the results of my assignments about my placement at All Saints Basingstoke (sermon 60% and theological reflection 75%) and was really hugely encouraged by them, especially the latter. It does make all the hard work feel a little more worthwhile, but it never ceases to surprise me that I seem to be able to do these things reasonably well… thank you God! However, what I’m really in this for is helping people experience God themselves, and develop their own faith, and I’m not sure the current module is going to tell me whether I’m any good at that… just whether I can reflect on what other people do in their lives, and how I relate to them.

So now I face another week with still too much to do… but I feel a little more calm about it, and a bit more encouraged.

One thought on “Skipping Church”