OK I’ve been having a problem recently, as you will have been able to tell from the layout of the last couple of posts, with getting things to layout clearly, with all the gaps and paragraphs I want.

If I paste something in from a programme like Pageplus X2 (which is what I write my sermons in, so they print out as a booklet) then even when I use the “full screen” mode with the “kitchen sink” nobs and whistles, when it’s published I lose most of the paragraphing etc… which is REALLY irritating.

Now I am quite willing to believe this is caused by my ignorance, rather than WordPress (and yes I’m up to date) but I’d really welcome some guidance please – if you understand this and think you can help!

Last week I led a ‘Celtic’ Morning Prayer at 8am for Pentecost. As part of the opening to the service I read something I had found in last week’s Church Times, and which (for those who don’t subscribe) I’ve shown below. I then used it to open my sermon:

O come, Holy Spirit, inflame my heart,
set it on fire with love.
Burn away my self-centredness so that I can love unselfishly.
Breathe your life-giving breath into my soul
so that I can live freely and joyously,
unrestricted by self-consciousness,
and may be ready to go wherever you may send me.
Come like a gentle breeze
and give me your still peace
so that I may be quiet and
know the wonder of your presence,
and help diffuse it in the world.
Never let me shut you out;
never let me try to limit you to my capacity;
act freely in me and through me,
never leave me, O Lord and giver of life!
by Michael Hollings and Etta Gullick from “It’s Me, O Lord” (Mayhew McCrimmon, 1972)

I’m not sure what you’ll think about my ideas on peace – I was really stretched, and didn’t have time to read round my thoughts thoroughly, so feel free to drive a horse and cart through my theology: Sermon John14 v8-17 and 25-27

Pentecost marks a spiritual anniversary for me – which won’t surprise anyone who has ever worshipped at St. Michael’s Aberystwyth, or experienced the excellent preaching of Revd Stuart Bell. Something clicked open inside me in May 1988. Though I may frequently doubt myself, I hope that I allow God’s Pentecost gift to remain the powerful force of direction in my life.

For the 2nd time in three years I will be waiting on the Holy Spirit in our Chapel at our 8am Morning Prayer on Sunday – waiting expectantly to hear Gods’ still, small voice as he moves among us. I already know that what I will be preaching this year, will differ greatly from what I preached in 2008, although the Celtic liturgy of the service that I will lead will be the same (something I’ve adapted from Iona material).

For the sake of comparison, and completeness (since I wasn’t blogging in 2008) here is what I preached then (I will publish this years sometime next week). It is a short reflection written around Acts2:1-21 which should be read in the middle of it:

Great couple got married at St. Peter’s this last weekend, and with their special guest greeting them as they came out of church, they let me take some photo’s that our webmaster will be able to use on our website. The bride will be riding the horse (who was impeccably behaved) in a triatholon next month.

In conversation with the Moxham’s of Bolyn Wedding Car Hire, they wanted to use a photo I took on their website too (with the couple’s permission), which I was happy to do. They’ve been more efficient than me though and got the picture up faster (here – scroll to bottom)! The horse and the old car (carriage) looked really good together. Another good connection made in case we get to go ahead with the Wedding Fair idea at St. Peter’s next year.

Back during Holy Week, I posted “I’ve gotta go” the first of a trilogy of interpretations of the Holy Week story, written by my husband.

Although not quite to time, he did complete them, and I post all three here for you to read and think about.

Anyone connected with CPAS or regular readers of the Church Times may spot that they (and particularly the third story) has been inspired by the artwork created by Simon Smith. Someone else I know was commissioned by CPAS to create reflections on them, but following from our Storytelling retreat with Sarah Rundle in March, G was really inspired and Holy Week gave him the space to use his creativity. If he didn’t teach, I’m sure he’d write stories…

Perhaps you could encourage him to share my blog and have some pages of his own!?

To celebrate the success of the final essay and the fact it is spring, and inspired by the new WordPress theme ‘Twenty Ten’ I’ve given the blog a bit of a make over.

The new header photo was taken by big G this evening in the churchyard of St. Peter’s where there are currently blue, white and mauve bells (not, I fear, native).

There are various features I think are better, like the footer widgets, though whether I’m making best use of them I’m not sure. If I use more pages, the drop down from the page links will also be good – currently only visible under ‘Theology’. Behind the scenes, the fact that the Editor now gives you an accurate visual representation of what the finished post looks like, is also a really helpful improvement. As yet I’ve not decided whether to customise the fonts – for the moment I like the default; its certainly larger and easier to read than it’s predecessor.

So, please let me know what you think and tell me if there’s anything you’re used to seeing that I’ve missed, or that you want moved up from the footer widgets.

Should I write more permanent pages, and if so what about? One idea would be to feature the wildlife of specific areas, and another the theology of specific things that interest me (stuff on marriage perhaps)? Or should I create a feature page of my essays from the training course, rather than making folks trawl through the archives or the tag cloud? I’d welcome your thoughts please!

Last Sunday I led and preached at our 8am morning service, a short half hour in the peace of our Chapel at St. Peter’s.

I have thought on several occasions that I have spoken for too long at this service, so last week I planned a much shorter talk, and then worried for most of the week that it wasn’t long enough and didn’t say anything particularly helpful to the congregation.

Late on Saturday I learnt that God needed me to give a short talk that morning, and the theme of overcoming our spiritual ‘superstitions’ and acting decisively to step forward into the future with Jesus, was perhaps far more appropriate than I had supposed. At the end of the service (having tipped me off the night before, bless him) our vicar announced that as he starts a new phase in his own life with his wedding in the summer, he will be starting a new ministry among Fresh Expressions projects in Marlow! We enter interregnum in late July.

Here’s my public acknowledgement of grateful thanks for the help, encouragement, faith and support our vicar has given me over the last 4 years of training – I am totally in your debt P (I could go on, I won’t!) As you know I thoroughly recommend married life as the best thing I’ve ever done – God’s always been there for me, being married was a bonus!

So for what it’s worth, a short thought on walking away from spiritual superstitions: Sermon John5v1-9

If theology seeks to answers questions like “where is God in…” how often do we ask ‘Where is God in my marriage?’

In simple terms that was the sort of idea behind the essay that I wrote to complete my Foundation Degree in Christian Theology and Marriage – you may indeed have been part of the process if you read this blog regularly. It has already been circulated among one or two folk, at least one of whom has found it quite helpful.

Well, on Friday I heard I had passed the essay and with it my Foundation Degree, and yesterday I received it back, complete with attendant comments. I got a reasonable mark for it.

So, here, by way of celebration as I remove the ‘nearly trained’ from my blog, I humbly offer the world my thoughts on the theological themes that can be found in marriage and should therefore emerge in a course of marriage preparation.

If you’re looking for a summary of what is after all a 6000 word essay, here are the things that I felt were most significant to ministry whilst I was writing it (I’ll leave you to decide whether they come through in the essay or not):

It all seems most appropriate on a day when my vicar has announced his wedding date, and a close friend her engagement! 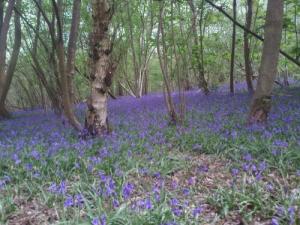 A pleasant family walk whilst celebrating two birthdays this weekend produced these delightful scenes at Sheepsleas near West Horsley in Surrey.

I have a real ‘thing’ about Bluebells… which stem from childhood walks at a place near Fritham in the New Forest, and I get very excited wherever I see them to this day. Cowslips speak to me of real English rural pasture, something that we have so little of these days. At Sheepsleas I don’t think it’s grazed but they somehow maintain this fantastic wildflower meadow – later in the season it will be full of herbs, day flying moths and butterflies.

On Wednesday last week I both heard my first Cuckoo of the year, and saw it as well! Dad and I took an hours ramble from Thrifty Gate near Stoney Cross – a good place to meet so we dog walk before I take on the one-way system into Lyndhurst.

Other than that, with the dog’s missing toenail growing back slowly and a rather busy diary, I’ve not been out and about much. We’ve sorted out a load more belongings and I’ve made two trips to our church charity shop. A lot of the things I want to get back to remain slightly hypothetical, though I have got as far as ordering my Fishing License for this year, buying the makings of two hanging baskets and I’ve acquired some greenhouse veg, courgette and spicy salad plants!