Dare to Break Bread – a reflection from discernment 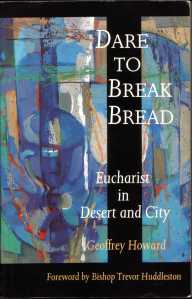 Following on from my previous reflections (here and here) written in the last few weeks before my BAP, re-reading the following written some months earlier I find that there have been several echoes of my reflections on what Bishop Jonathan Frost (Bishop of Southampton) asked me to read during my Diocesan Panel Interview with him in November 2011.

It was a book called ‘Dare to Break Bread – Eucharist in Desert and City’ by Geoffrey Howard, that had been published in 1992. It focuses on the work of a priest (the author) in the light of the Eucharistic liturgy (the words Christians use at Holy Communion.) The following is a copy of my letter to Bishop Jonathan in January 2012 responding to the three tasks he gave me in connection with the book, and forms a review and reflection of it:

The first part of your charge to me I failed, as I did not achieve it before Christmas; the festive demands got in the way I’m afraid. Actually this confession of failure almost seems appropriate to the book. Within it the author shares so much of his burden of guilt for what he seems to feel is constant failure. I found myself wanting to hold him before God (as he does Harry at the start of the book) so that he might find absolution.

The second part of your task I have now accomplished. With shoes off and candle lit in a wonderfully silent room at Alton Abbey, I read the whole book in a day. Now I am returning to my notes and thoughts as I read it, I once again appreciate the gift of that space, indeed any quiet space, within ministry. Geoffrey Howard wrote the book in a space within his ministry. It is from these spaces with God that perhaps we see most vividly the true “colours” of how we connect with God in people and draw people to God.

This letter completes the third part of the challenge you set me, that I write to you with my reflections. The book emphasises that the role of a priest is not restricted to the Lord’s Table or any other sacramental liturgy. Blood is truly shed, and the body and soul broken in day-to-day contact with those in whom we recognise Christ. We come alongside people on God’s behalf, yet we must expect Christ to be revealed to us in every encounter – the Christ who holds the pain and sacrifice of our failures nailed with him to the cross.

The word that struck me as I concluded the book, and has stuck with me in the days since, is “vulnerability”. By offering to serve as priests we make ourselves vulnerable in several ways. In the simplest sense, and with our families, we make ourselves vulnerable to unwanted interruptions, ‘reduced circumstances’ and spiritual attack. We will also have repeated occasion to make practical and spiritual sacrifices and make ourselves vulnerable to acts of aggression – verbal, material and physical. It’s like in the very act of being “gospel” we offer people the right to metaphorically nail us to the cross next to Christ – whether they do so deliberately or we do it to ourselves in our responses, both visibly and invisibly.

If we understand the Eucharist as a sacrament of community (“sharing the bread of common experience”) then this book seems to emphasise its’ place as the culmination of all that proceeds it through the days or week of other “sacramental activity” that precedes it. Our connection with Christ in the Eucharist should therefore lie in what we bring to it, not that which we expect to receive from it.

Perhaps in this lies some of the differences and tensions between the Eucharistic worship of evangelical and catholic traditions. Is there any truth in the idea that for many of a more evangelical persuasion, the Eucharist can be a place from where people take the Gospel message out into the community, rather than the place of Resurrection to which those of a more catholic persuasion bring to Eucharist both the burdens and joys of the Gospel message in community? For if Christ had not been raised from the dead, we would and could not share in the remembrance of the broken body and blood of Jesus; so we must first have shared in that sacrifice through our living and preparation for Eucharistic worship.

The thing that truck me as liturgically most significant, and something I’d like to know more about, was the question that Howard poses early on: where is the freedom of unconditional forgiveness in our Eucharistic liturgy? Beyond the reason of tradition, I don’t know why the liturgy maintains a stance of repeatedly seeking God’s mercy after the absolution, which seems on the face of it to conflict with a Gospel of abundant grace.

Thank you for making this book part of my journey to understanding a calling to ordination. It leaves many questions unresolved in the readers mind, but then I don’t think it set out to answer any, only to highlight that there is no black and white in our faith, and how we are called to live it out. Instead it highlights the many tensions that a priest draws from the community they are called to serve, and is required to hold as a humble offering before God.

Please shop my latest makes at Ramtopsrac Creations on the nuMonday platform.