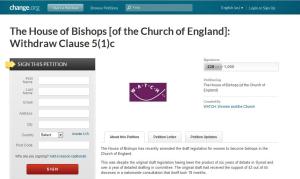 As my previous post on the subject of the legislation enabling women to be selected and ordained to the episcopate suggested, I (like thousands of others) was not impressed with one of the House of Bishop’s amendments to the legislation previously voted for by 42 out of 44 diocese of the Church of England.

But I was also deeply concerned by the thought that women I know and admire, both priests and/or General Synod members, would prefer the amended legislation NOT to be passed rather than be passed in it’s revised form, which increases the appearances (and possibly the fact) of discrimination that will be retained in the legislation. I can understand why, but it troubles me.

I have watched with interest in the last few days as first the Diocese of Salisbury, then Gloucester (with their Bishop’s address here), voted for the amendment, or the legislation in it’s entirety, to be revoked. In both cases this was done with the support of the relevant diocesan bishops!

Today, WATCH (Women and the Church), have created this on-line petition asking for the amendment in which the House of Bishops appeared to create a two tier system of bishops to be withdrawn. I have signed it this evening, as a “Reader/Ordinand”, with the following comment:

The Synodical system of the CofE supported by the majority of those who debated and voted, the legislation originally tabled regarding women bishops. The House of Bishop’s amendment to Clause 5(1)c, seems to have made more overt the discrimination retained in the legislation, to a level that many supporters of women bishop’s find intolerable. It has also shown the leadership and legislative process of the CofE to be flawed, reducing still further the limited respect it holds both within the church it seeks to lead, and in the wider community.

Please withdraw Clause 5(1)c, so that we can proceed swiftly to witness the long-over due opportunity of having our most able women appointed to the episcopate in a way that enables their relationship with their colleagues and the people of the church to exist on an equal footing to that of their male counterparts.

I believe that this course of action, this step of humility by the House of Bishop’s, will enable the legislation to be passed, and thus give all those engaged in ministry within the CofE encouragement to concentrate their energies more fully on our calling under God to expand his Kingdom on earth, and glorify his name.

If you feel able to sign the petitition, whether as a Anglican, a Christian of any denomination, or indeed an agnostic or atheist who supports the equal rights of women to positions of leadership, please do so.

If before doing so, you want to read some other reflections and viewpoints on what is a complicated subject, I can recommend the following links: Lay Anglicana today and previously; the (new look) Church Times (which may be subscribers only); WATCH’s ‘statement of concerns’; various Thinking Anglicans links (and the comments thereon) including here, here and here.

From what I can gather through some of these links, there seems to be no previous example of such an amendment being withdrawn, but Christians believe in a God of miracles, and there is always a first time for everything!

5 thoughts on “Humility required in the name of equality”