This morning a Change.org petition started doing the rounds among my Facebook friends which seemed to suggest that Facebook had created a “law” that stops religious leaders (implying in particular, Christian ones), from using their appropriate title. The warning was that if you tried to use your “Rev’d” “Father” or similar title, Facebook would stop you accessing your account.

I was less than convinced that this was true, so I didn’t sign, but I was concerned about the issue, so I messaged my friend Alec Muffett, who is a computing security guru and importantly, works for Facebook. I asked him what Facebook really do. This is what I discovered:

This story appeared a couple of days ago, after a Rev’d Fr was locked out of his Facebook account. The Change.org petition appears to relate to it, although a different petition is mentioned in the article.

Now, I have a second Facebook account, set up last year when I was ordained, so that my social media relationships with parishioners are separate to those I have with long-standing friends. It’s a boundaries thing, something that lots of us are warned about before we’re ordained. I had, in common with the clergymen in the above article, resorted to using Rev’d in the ‘first name’ box when setting it up, so it read “Rev’d Rachel” and it showed up as “Rev’d Rachel Hartland”. I didn’t really want to have this account blocked, which is why I was interested to find out the truth.

Facebook’s policy is in fact that they simply don’t want anyone using ‘honorifics’ as their known name whether born of employment, ordination, good works or anything else. To quote my friend, “It is not a religious prohibition its a general policy.” The rule would apply to a Knight of the Realm as much as a humble curate!

But before we still jump up and down saying we really, really want to use our legally acquired title on Facebook, however gained, the answer is – we can. There is a place provided for ‘other names’ in part of our profile set up, and it then shows up on our profile.

Alec kindly told me about how to put my “Rev’d” on the appropriate Facebook account, and I’ll put the instructions below, but first I think we need to remember something important if we want to use Facebook appropriately in ministry, with boundaries that protect us, whilst making it clear the capacity in which we’re using an account for the protection of others:

Facebook want to keep people safe by getting them to use their real names, rather than hiding under pseudonyms. It’s for our security, not theirs, and it will help Facebook stop the more dangerous uses of pseudonyms (e.g. for stalking people online) if we respect and encourage their ability to stop people accessing accounts that do not use people’s real names. So, we need to use, and promote, the means by which Facebook have enabled us to honour our calling, and be careful not to assume that social media providers haven’t thought through their policies carefully. There may well be room for improvement, but that goes for ministers as well, and there will be a greater respect on both sides if we try to check things out first, where possible, and abide by the guidance they give. It also means double checking the reasons for petitions it might be suggested we sign up to.

So, the how to get “Rev’d” on Facebook guide (other titles can be used): 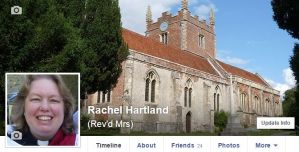 All of which seems to me to be quite acceptable. Happy Facebooking ministry friends!

12 thoughts on “Has Facebook banned the use of religious titles? NO, it hasn’t. Here’s why, and how to use yours!”