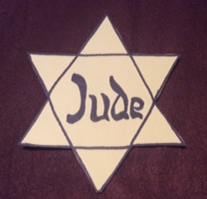 Today I have lead an ‘Act of Worship’ in the Church of England VA Junior School of the parish I serve.  It has to be based on the Christian faith, but today’s brief is to link Holocaust Memorial Day  with the theme of responsibility for the wider community.(UNCRC: Article 38 – Every child has the right to be protected and cared for in countries affected by war)

Building on the fact that a colleague used the story of the Good Samaritan last week, I will be using the following material, which others may find thought provoking, or helpful to reflect on today.

Excerpt from the story of Corrie ten Boom, the daughter of a watchmaker in Holland. Here is what she says about life after the Nazi’s invaded Holland:

The true horror of occupation came over us only slowly. During the first year of German rule there were only minor attacks on Jews in Holland. A rock through the window of a Jewish-owned store. An ugly word scrawled on the wall of a synagogue. It was as though they were trying us, testing the temper of the country. How many Dutchmen would go along with them?

And the answer to our shame was many…

On our daily walk Father and I saw the symptoms spread. A sign on a shop window: JEWS WILL NOT BE SERVED. At the entrance to a public park: NO JEWS. On the door of the library. In front of restaurants, theatres, even the concert hall…

One noon as Father and I followed our familiar route, the sidewalks were bright with yellow stars sewn to coats and jacket fronts. Men, women and children wore the six-pointed star with the word “Jood” (“Jew”) in the centre. We were surprised, as we walked, at how many of the people we had passed each day were Jews…

Worst were the disappearances… We never knew whether these people had been spirited away by the Gestapo or gone into hiding before this could happen. Certainly public arrests with no attempt to conceal what was happening, were becoming more frequent…

It was [on] a drizzly November morning in 1941… that I saw a group of four German soldiers coming down the [street]. One of the soldiers un-strapped his gun and with the butt banged on the door [of our Jewish neighbours house.]… The door opened…and all four pushed inside…

[Later my sister Betsie and I saw] Mr Weil [our elderly neighbour], backing out of his shop, the muzzle of a gun pressed against his stomach. When he prodded Mr Weil a short way down the [street], the soldier went back… and slammed the door…

A window over [Mr Weil’s] head opened and a small shower of clothes rained down on him – pyjamas, clothes, underwear. Slowly, mechanically,… He stooped and began to gather up his clothing. Betsie and I ran across the street to help him… “You must come inside!” I said, snatching socks and handkerchiefs from the [street]. “Quick, with us!”

Listen and watch very carefully the story this lady is telling: (this is the official video for HMD2016 https://youtu.be/_mk6xNumdgc

Jesus, you asked us not to stand by
when we see people who are suffering and in need.
Help us to show that we are willing to share responsibility
for caring for those who have nothing,
wherever they have come from,
and whatever their nationality or faith.
Amen.

[My husband is a secondary school teacher who will be using different material on the #HMD2016 theme in an assembly tomorrow. It can be found here.]