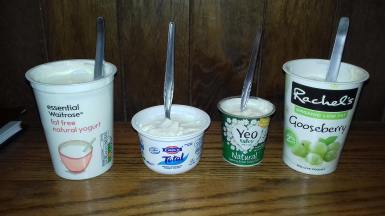 Do you prefer the thin, natural yogurt, that’s dribbly and perhaps a little sharp and acidic in it’s taste?

Or perhaps, the thick, very set Greek or Turkish style yogurt, which almost has a crust to it, that you have to cut through to get to the spoonfuls of jelly-like goodness below?

Or you may be a thick spooning yogurty sort of person, whether that be of the milky kind, or the coconut based, lactose free variety that I discovered recently?

Or is your yogurt of preference, not just thick, but also creamy and full of fruity goodness, giving the tastebuds a treat, as well as possibly the waist-line?!

Now, if you’re not a yogurt eater, or perhaps even you may be a yogurt hater, I beg your indulgence this morning, and ask you to stick with me on this analogy! Think of it as a little bit of culture on a Sunday morning ;-/

Because that’s what I’m asking us to consider: what is the culture of St. Mary’s as a church? Are we a bit thin, sharp and acidic… or growing towards a thick, fruity goodness that will add to the church’s waistline, in the quality of our faith and discipleship as well as in our numbers?

In our Epistle from this morning, we are reaching to the core of the second half of Paul’s message to the Christian community in Rome. He is emphasising that the love that believers must show towards each other should be a response to the love they have received from God, about which he has talked at length in the first half of Romans. For example, “Owe no one anything except to love each other, for the one who loves another has fulfilled the law” (Romans 13:8-10). The exhortations of Romans 14:1-12 however, suggest that in this community, love is thin because faults are thick.

The passage addresses a conflict in the body of Christ about ceremonial practices that are peripheral to the gospel. Some — whom Paul calls the “weak” — believe that, according to Jewish tradition, certain foods are to be avoided and certain days are holy. Others — normally called the “strong” by way of contrast — believe that all foods and all days are equally fitting for believers to enjoy.

Paul is not addressing the issue of righteousness by works of the law or suggesting that the weak are somehow seeking a “works-righteousness.” Rather, he sees the choice about practice as of a matter of conscience and an expression of faith (Romans 14:5-6). Paul largely directs his words to the “strong” because the issue with which he is concerned is the absence of love and unity in the body of Christ. While the practices regarding food and days are peripheral to the gospel, the way believers in the community treat one another is central to it. In other words, what people were eating and drinking and why, was totally immaterial; what was, and is, important is the love that people have for God, and whether they show it in the way that they treat each other. That isn’t lived out if people in a community are constantly judging one another… something Paul thinks is so important that he mentions it 5 times, across 4 verses, in this one short passage.

In our Gospel this morning, Jesus’ theme of unlimited forgiveness isn’t so dissimilar: The unforgiving servant is effectively a chief finance officer, with control over the movement of vast wealth. The astronomical “debt” or “loan” he owes may represent the income he is responsible for producing from those lower on the pyramid of patronage. In the old Mediterranean economy, the goal was to pass a steady, acceptable flow of wealth further up the pyramid, while retaining as much as one could get away with for oneself, to be used to grease one’s own way further up the pyramid. When the king forgives this persons enormous “loan,” his obligation to the king is not so much wiped clear, but actually intensified.

The mercy, generosity, and forgiveness that God offers out of love for us his people, could and should be endless, but in reality it only stretches as far as we are willing to show that same mercy, generosity and forgiveness to others, as this power-filled finance manager discovers when he tries to pull rank on those who have in effect, greased his way to the top. His failure to carry on the forgiveness the king granted him not only halts the spread of the financial amnesty or jubilee he was given in its tracks, it also mocks and dishonours the king himself. Through his actions, this unforgiving servant binds himself not to the king’s mercy, but to the old system of wealth extraction and violence. He thus binds the king in turn to deal with him once again within the confines of this system. God’s forgiveness is shown to have necessary limits, and they are the ones we set through our own words and actions.

So where do these scriptures this morning leave us with regard to our own personal response to the grace and forgiveness that God has shown us, and in terms of our corporate life as Christians, and therefore our culture as a church?

In Romans 5:2 Paul writes that, “through [Jesus] we have obtained access to [God’s] grace, in which we stand.” We therefore need to remember that it is on the basis of Jesus’s death and resurrection, that God welcomes all believers as those who were weak and sinful (Romans 5:6-10). From this perspective, if we re-read Romans 14:1-12, none of us are strong. The point is that as believers, we are the weak-made-strong who stand in God’s grace now, and who will be made to stand confidently at the final judgement because of God’s gift of redemption in Christ. Since this is the case, who are we to sit in judgement over one another? Who are we that we dare not to forgive others, as we ourselves have been forgiven? We must aim not to be thick with faults, and therefore thin in love, but thin in faults and fault-finding, and therefore thick with love, for God and for each other.

As a church, and as individuals, it is not our place to judge, either privately or publicly, the choices that others make about what suits and feeds them, or their family, in a spiritual sense. Neither is it healthy to hold on to un-forgiveness, particularly within the Christian community, incredibly tough though that can sometimes be; it’s not healthy for us as individuals, and it is certainly not healthy for us as a church, because it stops God fulfilling the grace and forgiveness that is his character. Some of us may be in a pastoral position to gently and privately ask questions and challenge decisions or actions, but if as a community we openly pick holes in each other, tending to hold grumps and grudges, we create a culture of weak, watery-ness that makes us acidic to people’s taste, probably unattractive to outsiders, and generally thin on love. Not a helpful, rich or healthy culture.

Our desire as a community should be that we are a culture that is thick and creamy, attractively full of fruit, because we exhibit the spiritual fruit of love, joy, peace, patience, kindness, goodness, faithfulness, gentleness, and self-control (Galatians 5:22-23) as well as forgiveness and a non-judgemental generosity. If we consciously seek to make ourselves, well-filled in these fruit, we’ll naturally become stronger as a Christian community, richer in flavour to those who we pray will come and taste the love of God among us, and so add to this church’s waistline of faith and discipleship.

I’m finding the commentaries on Working Preacher really inspirational at present (for which thanks to them), and will freely admit that a couple of significant chunks of this sermon are from here, and here. The metaphor and the focus of my sermon was however all my own work!